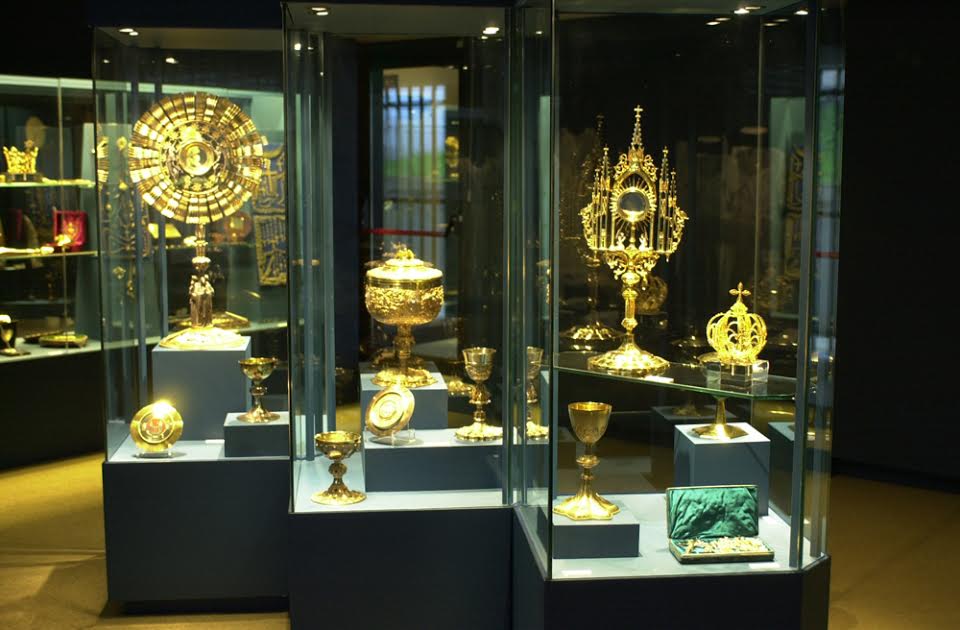 The Museum of the Shrine of Fatima has two permanent exhibitions: the first is named “Fatima Light and Peace”, located in the area of the Rectory and the second is a house contiguous with the original home of Lucia, the “House-Museum of Aljustrel”.

It also houses the offerings of thousands of anonymous pilgrims and religious and civil authorities, normally in gold and precious stones.

In addition to these two exhibitions, the Museum provides temporary exhibitions, like the one currently on display to mark the centennial of the Apparitions – “The colors of the Sun: the light of Fatima in contemporary world”. 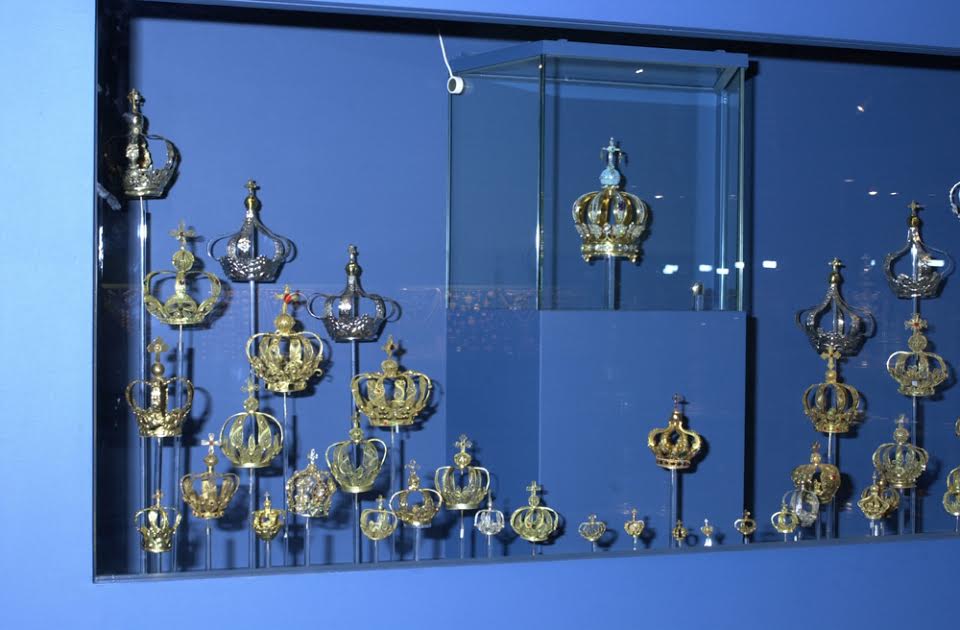 The exhibition “Fatima Light and Peace” its most valuable piece: the Crown of gold offered by the women of Portugal after a public subscription made on October 13th, 1942, in recognition of the non-participation of Portugal in the Second World War (1939-1945).

With 1,2 kilos of gold, 313 pearls and 2679 precious stones, the Crown is worn by the Statue of Our Lady during the main pilgrimages in Fatima.

Unique piece, it was executed generously by the jeweler Joalharia Leitão & Irmão, of Lisbon, the same firm that last February executed a copy that was placed in a statue of Our Lady of Fatima on February 18th, in a celebration that took place in the Cathedral of Westminster, London, presided by the Archbishop Vincent Nichols, Primate of England.

Since April 26th, 1989, the Crown presents the bullet extracted from the body of John Paul II following the assassination attempt on his life, on May 13th, 1981, in Saint Peter’s Square, Rome. The projectile was offered by the Pope himself to the Shrine.

The exhibition also displays the two Golden Roses granted to the Shrine of Fatima by the Popes Paul VI, on November 21st, 1964, during the Vatican Council II, and Benedict XVI, on May 13th, 2010, the only such occasion so far in which a Supreme Pontiff offers himself the symbol in Portuguese land.

The Museum was founded in 1955 and its permanent exhibition in 2002.

“Fatima Light and Peace” can be visited as follows:

It is closed on Mondays, on the 13th in the morning (from May to October), on December 24th, in the afternoon, on December 25th, and January 1st.

If the permanent exhibition intends to preserve the memories of the Apparitions and the objects offered to the Shrine, the House-Museum of Aljustrel has as a purpose to show how people lived in the region during the first 20 years of the twentieth century.

Inaugurated in 1992, in a house that belonged to Maria Rosa, godmother of Lucia, and contiguous with the parents’ house of the little shepherd, the House-Museum of Aljustrel presents thematic cycles related to the life and work of that time, such as professions, costumes, interior of houses and bread.

It can be visited as follows:

It is closed on Mondays and December 25th.

Temporary Exhibition
“The color of the Sun: the light of Fatima in the contemporary world”

Considered by the Shrine as the most ambitious ever produced, gathering its own artworks and loaned artworks from different parts, the exhibition “The color of the Sun: the light of Fatima in the contemporary world” intends to recreate the environment of the day of the last Apparition of Our Lady, on October 13th, 1917, based on the accounts about the Miracle of the Sun.

According to the service in charge of it, its objective is to show that October 13th, 1917, was the beginning of a new era in which the protagonist is now the pilgrim who seeks Cova da Iria, attracted by the Message of Fatima.

On display in the Basilica of Most Holy Trinity, in Saint Augustine’s Social Hall, the exhibition, inaugurated on November 26th, 2016, will be open to the public until October 31st, 2018, celebrating the Centennial of the Apparitions.

This exhibition can be visited daily from 9.00 am to 7.00 pm; the admission is free.

Pope Francis will offer a third Golden Rose to Fátima

Offer will be made in Capelinha das Aparições

The Message of Fatima, the Rosary and the Peace are the remaining subjects already announced

This site uses cookies to enhance your experience. When you continue to browse, you are accepting